Translation for this page is coming soon.

Ovulation - the release of an ovum by the ovary - is the most important event of the fertile cycle; it occurs only once at a moment in time during the cycle, even when more than one ovum is released.

Oestradiol is produced alone by the developing follicle before ovulation; it stimulates the glands of the cervix to secrete a particular type of mucus ("mucus with fertile characteristics") which is essential for the sperm to pass through the cervix and reach the ovum. Oestradiol also stimulates growth of the endometrium lining the uterus (womb).

After ovulation, progesterone and oestradiol are produced by the corpus luteum which forms from the ruptured follicle. This progesterone causes the abrupt change in the mucus which occurs immediately after ovulation and defines the Peak symptom.

Progesterone also prepares the oestrogen-primed endometrium for implantation of the fertilized ovum.

In the absence of pregnancy, production of oestradiol and progesterone begins to decline approximately 6-7 days after ovulation and this results in shedding of the endometrium as menstrual bleeding 11-16 days after ovulation. The Billings Ovulation Method™ utilises the changes in cervical mucus production as observed by the woman herself for identifying the underlying events of the ovulatory cycle.

The cyclic changes in ovarian activity are controlled by the secretion of two hormones by the pituitary gland, follicle-stimulating hormone (FSH) and luteinizing hormone (LH). Production of these hormones is controlled in turn by an area of the brain called the hypothalamus. The hypothalamus acts as a computer, analysing nervous signals from other areas of the brain including those generated by the emotions and by environmental factors, such as dark and light; it also analyses hormonal signals generated in the ovaries and other endocrine glands and transmitted by the blood stream.

The ovarian cycle proceeds in an well-ordered series of events. During the latter half of the preceding cycle, the high output of oestradiol and progesterone acting via the hypothalamus suppress the production of FSH and LH by the pituitary gland. The waning production of oestradiol and progesterone by the corpus luteum at the end of the cycle removes this suppression and the FSH levels rise.

The follicles within the ovaries have a threshold requirement for FSH below which no stimulation occurs. Initially the FSH values are below this threshold, but they rise slowly until the threshold is passed and then a group of follicles is stimulated into active growth. Several days of growth are required before the follicles start producing oestradiol which is secreted into the blood stream and reaches the hypothalamus to provide the signal that the threshold has been reached.

There is also an intermediate level of FSH production which must be exceeded before a follicle is finally boosted into its full ovulatory response, and a maximum level which must not be exceeded otherwise too many follicles are stimulated and multiple ovulations occur. The maximum level is only 20% above the threshold and thus precise feedback control of FSH production by the oestrogen produced by the follicles is essential.

As the dominant follicle races towards ovulation, it produces rapidly increasing amounts of oestradiol. This oestradiol stimulates production of cervical mucus and also suppresses FSH production below the threshold value, thus removing support required by the lesser follicles which are competing in the race to ovulation.

The fall in FSH also turns on a maturing mechanism within the dominant follicle which renders it receptive to the second pituitary gonadotrophin, LH. The high oestradiol levels also activate a positive feedback mechanism in the hypothalamus which causes the pituitary gland to release a massive surge of LH. This surge of LH is the trigger which initiates the rupture of the follicle (ovulation) approximately 37 hours after the beginning of the surge of LH or 17 hours after its peak.

Ovarian production of oestradiol falls abruptly during this interval before ovulation. After ovulation the ruptured follicle is transformed into the corpus luteum, and production of the second ovarian hormone, progesterone, increases rapidly together with oestradiol. This progesterone causes the abrupt change in the characteristics of the cervical mucus which marks the Peak symptom and its decrease towards the end of the cycle causes the bleeding--menstruation. 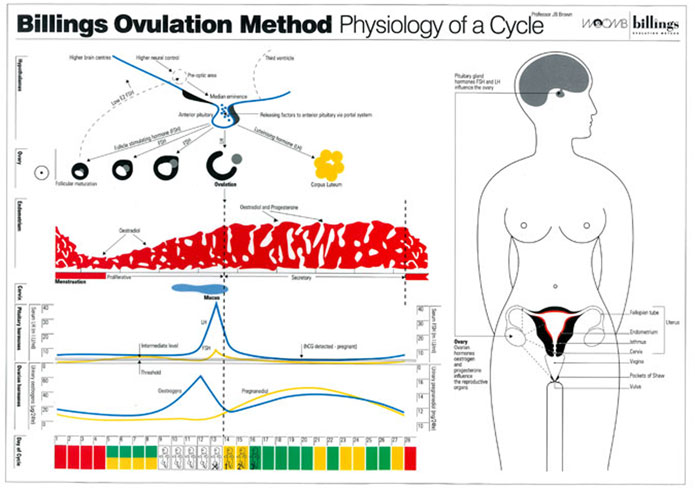 All the above mechanisms require periods of time which are practically constant from cycle to cycle and woman to woman. However, the rise in FSH production to the threshold and intermediate levels may be subject to delays. During the normal 28-day cycle the threshold is reached on approximately day 7, but in women with very long cycles it may not be reached for several months, approximately 23 days before the next menstruation. No follicular development occurs until the threshold is reached and therefore very little oestradiol is secreted and no mucus is produced. The woman experiences a succession of "dry" days during this time.

Unless the woman has reached the menopause or has permanent amenorrhoea, the FSH values eventually rise to exceed the threshold and follicular development commences. During the normal cycle, the rise in FSH production above the threshold continues without interruption so that the intermediate level is exceeded within a few days and the dominant follicle receives enough stimulation to be boosted to ovulation, the time interval between exceeding the threshold and ovulation being 7-10 days. However, the rise may be arrested before the intermediate level is exceeded and the follicles remain in a state of chronic stimulation.

The amounts of oestradiol secreted stabilize at levels less than those of the pre-ovulatory peak and are sufficient to stimulate cervical mucus with more fertile characteristics which remain the same while the oestradiol levels are constant and until the dominant follicle is boosted to ovulation with higher oestradiol levels. The oestradiol stimulates the uterine endometrium, so that in time oestrogen breakthrough bleeding may result. This is the usual cause of intermenstrual bleeding or spotting.

Eventually the feedback mechanisms operate to increase the FSH values above the intermediate level and ovulation promptly occurs within 7 days. The recording of "dry" days or patches of mucus during the pre-ovulatory phase of prolonged cycles is in effect a record of whether the FSH levels are respectively below or above the threshold and follicles with oestradiol production are absent or present.

Once the dominant follicle has been boosted to ovulation, the resulting events occur with set time sequences. The boosting phase takes 3 days, the time between peak oestradiol production and ovulation 1½ days and the interval from ovulation to the next menstruation is 11-16 days. A shortening of the latter interval to less than 11 days denotes an infertile cycle, and a lengthening denotes pregnancy.

The maximum symptoms of the production of mucus with fertile signs are observed on the day of peak oestradiol production which precedes the Peak mucus symptom and ovulation. The rapid change following the Peak mucus symptom occurs very close to the day of ovulation and is due to the increasing production of progesterone at this time. The onset of the next menstrual bleed in the absence of pregnancy is highly predictable from these events.