"The cervix is a precision organ as complex as the eye." 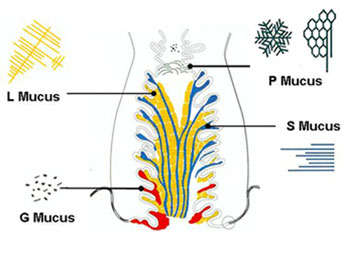 The cervix lies between the vagina and the isthmus which leads to the body of the uterus. It is 25mm long and contains several hundred crypts (glands) lined by cells which, under hormonal and neural influence, manufacture mucus, which is released into the cervical canal.

The fertility of the woman is regulated by the various functions of these secretions. Due to their varying combinations, the woman recognises her fertility by observing changes in sensation and appearance of the mucus at the vulva.

The mucus type can be identified microscopically by taking a sample from the cervical canal and spreading it thinly and rapidly on a glass slide where it is left to dry without a cover slip. The different types are identified by characteristic crystalline forms.

The G Mucus (red on the diagram) has no crystalline formation. It is very cellular and forms part of the immune system which protects the woman's reproductive system from infection. It closes the cervix for most of the cycle preventing the entry of sperm into the cervix thus ensuring infertility at these times. An impenetrable gestagenic mucus, it is formed in the lowest cervical crypts.

The L Mucus (yellow on the diagram) is secreted by crypts throughout the length of the cervical canal. When dried it forms crystals at right angles to the main stem in the typical ferm pattern. It supports the P mucus and the string-like formation of the S mucus. The L mucus attracts low quality sperm which are then eliminated, leaving only the high quality sperm to reach and fill the S crypts. These are then locked in by L mucus from a half to two days, during which the crypts are non-secretory and the sperm immobile. The L mucus produces a wet, sticky sensation at the vulva and occurs for a variable number of days before and up to three days after the Peak day.

The S Mucus (blue on the diagram) is secreted from crypts occupying the upper half of the cervix and the crystalline pattern shows parallel needles. The S mucus is present in string-like formations in the cervical canal. It is present for a variable number of days before and up to three days after ovulation. The S mucus provides nourishment for the high quality sperm and channels for their transport to the S crypts. It produces a wet, lubricative sensation at the vulva.

The P Mucus (green on the diagram) is produced in the uppermost crypts of the cervix. It crystallises in characteristic hexagonal structures with the crystals at 60 degrees to the main stem. It is arranged in an onion-like layered fashion, just below the isthmus. Shortly before ovulation the P mucus reaches 4 to 8% of the total mucus volume and, combining with the enzyme in the Z granules from the isthmus, has a liquefying effect, especially on the L mucus so that successively the sperm cells, which have been locked up in the crypts, are released and can now rapidly continue their journey to the ovum, conveyed by the P mucus. The liquefying effect of the P mucus dissolves the L and S strings, so that the Peak symptom is a very lubricative (slippery) sensation at the vulva often without visible mucus. P mucus continues in diminishing quantities until the third day past the Peak day.

At six days before the Peak the oestrogen level is low and the narrow cervix is occluded by G mucus. The sperm are kept out in the vagina where their survival time is very short. The vulva feels dry or the woman may notice an unchanging pattern of a slight discharge. She is infertile - this is the time of the Basic Infertile Pattern which may have been ongoing for days or weeks up until this time. As the oestrogen level begins to rise (at 5 days before Peak on the diagram above) the P mucus liquefies the thick G mucus and, mixed together with the L mucus, leaves the cervix. The sperm cells can now enter the cervix. The mucus rapidly reaches the vulva which is no longer dry, indicating possible fertility. The changing pattern of fertility now begins.

As the oestrogen rises (days 4 to 1 before Peak) the G mucus diminishes, L mucus increases, S mucus begins and increases, and the P mucus occurs again very close to ovulation. The changes in the fertile pattern are observed at the vulva and are caused by the changing proportions of the mucus types (see graph below). Strings, due to the combination of L and S mucus, may appear 1 or 2 days before the Peak but disappear as the P mucus dissolves the L and S, leaving only a slippery sensation at the vulva. The woman is now at her most fertile.

Day 0 - ovulation is imminent. The cervix has reached its peak development for conception. The oestrogen level is high and is about to fall steeply. Conditions are most favourable for selection and rapid transport of high quality sperm. Progesterone is beginning to rise. The vulva is slippery and swollen indicating the Peak of fertility.

Over days 1, 2 and 3 past the Peak the G mucus begins to form in the lower crypts. Channels for sperm transport exist in diminishing numbers over these three days. As ovulation may occur on Days 0 or +1 or +2 past the Peak, and as the ovum may survive up to 24 hours, conception is possible until the fourth day after the Peak. The vulva is now dry or sticky, due to the action of the rising progesterone on the Pockets of Shaw at the lower end of the vagina, which absorb the moisture from any mucus before it reaches the vulva. Though the woman feels no longer wet or slippery, these three days are still fertile.

From the fourth day past the Peak until the beginning of the following menstruation (11-16 days later) the woman is infertile and the cervix is occluded with G mucus. 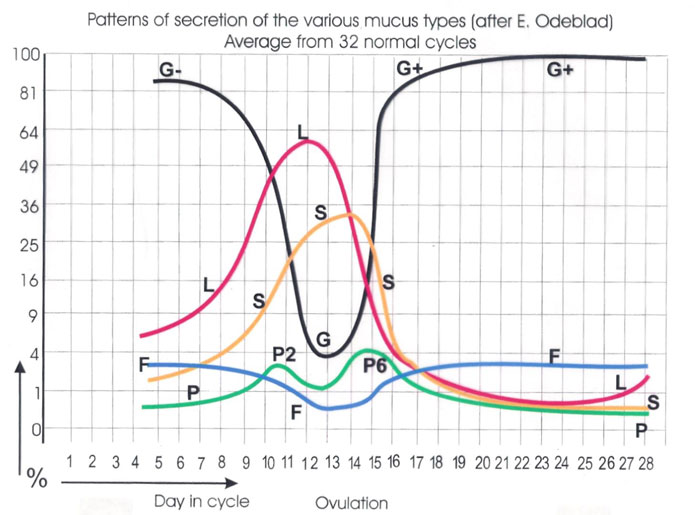