Due to the Festive Season our office will be unattended from December 21 to January 23, 2023. Please direct all enquiries to: enquiries@thebillingsovulationmethod.org

The Billings Ovulation Method® chart of a 28-year-old woman showed several months of abnormal cycles, with excessive thick and sticky mucus and no obvious changing pattern suggestive of ovulation. In one cycle, she experienced fertile symptoms followed immediately by bleeding, then fertile symptoms again. Her Billings Ovulation Method® tutor referred her to her GP for investigation. Progesterone measurements confirmed that ovulation had occurred, but the charting was obviously confusing. She had a history of two miscarriages in the previous 12 months, and complained of anxiety, depression, fatigue and steady weight gain. She was found to have mild hypothyroidism and was prescribed medication. In the following months her Thyroid Stimulating Hormone (TSH) level returned to normal range, her fatigue and anxiety levels improved, and there was a gradual return of her cycles to a normal pattern. The following year she became pregnant and gave birth to her second child.

Cancer of the Cervix

A 33-year-old woman, an experienced Billings Ovulation Method® user, normally charted well-defined cervical mucus patterns and regular menstrual cycles. However, in her last two cycles she noticed a return of mucus with fertile characteristics after the Peak of Fertility. This clearly signified an abnormality, so she visited her doctor for investigation. A Pap test and biopsy confirmed adenocarcinoma of the cervix, and a total hysterectomy was performed. Fortunately there was no evidence of metastatic cancer. Her doctors commented that she would not have survived until her next scheduled Pap test if she had not identified the abnormality in her chart.

In the chart below, the recognition of abnormal bleeding enabled early diagnosis and successful treatment of an ovarian cyst. 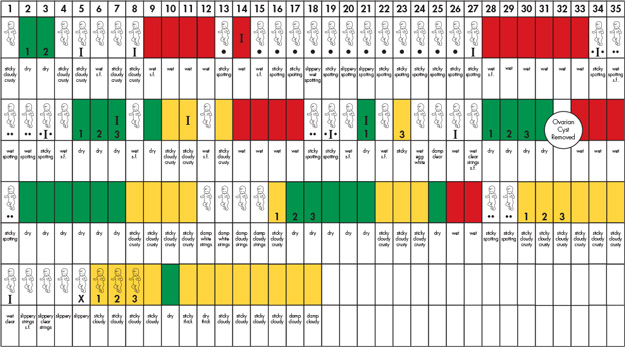